In April 2011, I elected to take Early Retirement from my post with Durham County Council having completed over 43 years in the Passenger Transport Industry, and thought it was about time to put down in writing, my experiences, before I forget them.
I am sure those of you who stumble across this site will quickly go back one page and find something more interesting to look at.
In 1968 I was finishing my studies at College in Manchester, Brooks Bar to be precise, (an area of Manchester which I will make acquaintance with later on in my career), when an Aunt of mine showed me an advert in the Oldham Evening Chronicle for the position of a Junior Works Clerk with Oldham Corporation Passenger Transport Department.
Having always had a passing interest in Transport of all kinds I thought that it would be a good steady job, with good prospects.
(Well it was until a certain Nicholls Ridley came along).
So I wrote an Application Letter, (no such things as a C.V., in those days), and waited for a reply.
This arrived a few days later when a car pulled up at our house and a gentleman got out and handed me a letter.

I later learned that he was the Insurance and Licensing Officer who lived in the same village as me. 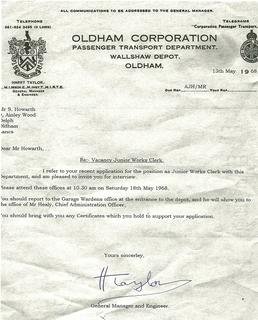 The letter inviting me for interview.

For those of you who have stayed with this until now, you would probably like to know the name of the village. It was (and still is for that matter) called DELPH. 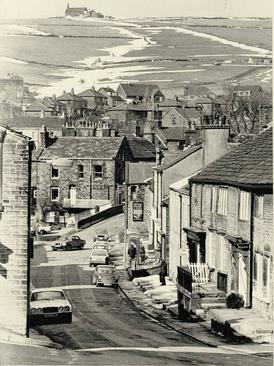 Delph is situated in the foothills of the Pennines, roughly half way between Manchester and Huddersfield on the A62, and was in The Urban District of Saddleworth, in the West Riding of Yorkshire, until moved into Greater Manchester in the 1974 Local Government re-organization.
There was much protesting, petition writing and public meetings to stay in the West Riding but all to no avail, it was moved.
Saddleworth is of course unfortunately more well known for the Moors murders, committed by Ian Brady and Myra Hindley, but I will not go there.
Delph is also famous for being the home - for a number of years - of another famous transport figure, that of Geoffrey Hilditch.

For those of you who have not read his books 'Steel Wheels and Rubber Tyres' (Volumes 1 & 2) I can thoroughly recommend them.

In recent years King Street, as shown in the postcard above, was used as the setting for the film 'Brassed Off',
where the band marched down the street to play at the Annual Whit Friday Band Contest. A clip of the film is shown below

Now back to the story. The letter invited me for interview at the Wallshaw Street Offices on the following Saturday morning - these were the days of 5 1/2 and 6 day weeks - with the Chief Clerk Mr. E. J. Healey.
So, the next Saturday, with shoes polished and trousers pressed I caught the bus from Delph Station to Oldham Mumps Bridge, (a journey I was going to make many times over the next few years), and made the short walk to Wallshaw Street Depot, and, as requested in the letter reported to the Garage Warden (what a grand title) who escorted me to the offices.
Here I was greeted by Mr Healey, and the interview commenced. Well 42 years is a long time, and I do not remember anything of the interview, except that at the end of it I was offered the post, and could start a week the following Monday on 27th May 1968.
The job which I had been lucky enough to get was as Junior Works Clerk in the Works Office, which was situated in the old Tram Depot.
So started 5 very happy years at Oldham Corporation Passenger Transport Department (later to become SELNEC PTE - Oldham District).

Above is an extract from the Annual Report of the General Manager for the Year ending 31st March 1969, which confirms my Appointment. The Oldham Corporation Depot was split into 2 sections separated by Car Street.
The 1st section that you came to was the old Tram shed. This Depot was originally opened in 1902, and offices were included in the original building, but were rebuilt in 1934 to the layout that I was to work in.

Trams were to operate out of this building until final abandonment of the system, on Saturday 3rd August 1946, and in 1952 modifications were carried out to make the workshops suitable to maintain the modern buses of the day.

The 2nd section was the Garage, (which is still in use by First Group), was opened on 23rd May 1938, by Alderman J. Crabtree the chairman of the Transport Committee (formally the Tramways Committee). The new Garage and the old Tram Depot, were at the centre of the Undertaking's operating area at the junction of Wallshaw Street, and the afore mentioned Car Street, and was built with a view to minimising dead mileage and reducing working expenses, and, at that time was the most modern motorbus garage in the country, and was a show piece, and was visited by officials from other Municipal Undertakings.
It was , and still is a remarkably fine building with a floor of 390ft by 350ft, giving a floor area of 136,500ft, and a main entrance, 54ft wide. The Garage roof has only 3 stanchions, supporting girders with spans of over 200ft.
It was built to accommodate 300 buses, (when I started it had approx 250), but as buses have got bigger, both longer and wider, plus bendibuses, this figure will now be much reduced.

The offices were entered up three steps at the top of which were a pair of double doors, in which were embossed glass panels on which were the Corporation Coat of Arms, and to the right of which was a brass plaque which proclaimed:- 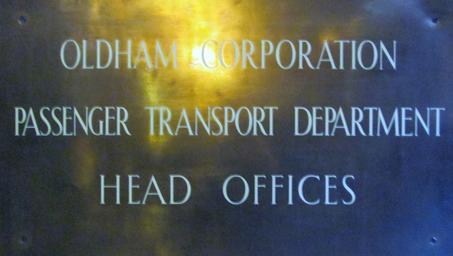 The doors opened up into the Enquiry and Lost Property Office which was all wood panelled, with a small enquiry window to the left, (I was to find out more of what went on in this office as time went on). This was the first time I had entered this imposing building by the main entrance, on the day of my interview I had gone in by a side door, because the Enquiry Office was shut on Saturdays. I reported for work by ringing the bell.
The window was opened by a very pleasant lady who I later found out was called Rene Trigg, (her husband was an Inspector, keeping up a tradition of families working on the buses).I was taken up to the first floor offices in an antiquated lift which had mesh doors on both sides. You entered in to the lift and then got out on the opposite side. I was shown where the Time clock was, because even office staff had to clock on and off, and taken to Mr Healeys' office, where, the official form filling took place, National Insurance Cards handed over, and more importantly I was given my FREE Bus Pass.
The world was now my oyster, or at least that part of it which Oldham Corporation ran in. The pass only allowed free travel on Oldham Corporation buses, if you caught a Manchester Corporation, or a North Western Road Car Company vehicle you had to pay.
This was a bit of a bind because living where I did (Delph if you had forgotten), was also served by both those two concerns, so I had to make sure that I caught an Oldham bus to get the benefit.
After all the formalities were completed, I was taken down to the Works Office. This was another trip in the lift, back down to the enquiry area.
The offices attached to the works were accessed through the Enquiry Office.

These had been built as a mezzanine floor above the workshops, with the Foremans Office, Electricians shop, and Fuel injection/Fuel pump test area below.  A veranda walkway looked out over the works, with the offices situated to the left with the windows looking out on to Car Street.
The first office you came to was the Bonus Clerks office, staffed by Jack Bolton, and Jean Probert, and - from Nov 1968 - Mo Baynham.
There were then, on the left a set of stairs leading down in to the works. The next office was the Work Study Engineers Office (with David Ward, Derek Wigett, Ivan Adams, and others whose names I can no longer remember). This was an expanding function, with all jobs in the works shops and Garage being studied, and given a time to complete the task, so that a Bonus could be paid.
The next office was the Works Office where I was to work. Next door was the drawing office, then the Assistant Engineers Office (Mr Eric Watts), later to work at Portsmouth Passenger Transport Department, then the Holy of Holies ‘The Chief Engineers’ office (Mr Eric Jenkins), later to become Chief Engineer for West Midlands PTE.
Mr Healey took me to see Mr Jenkins to be introduced, and then to the Works Office where I was introduced to the people I would be working with.
These were John Jenkins, Senior Works Clerk, Jeff Yates, Works Clerk, and Stella (her last name escapes me) who was the Shorthand Typist. These were the people I was to work with for the next 2 years or so, before I moved in to the Traffic Office.
So the first thing was to be given my desk, not difficult as it was the only one vacant.
I had my back to the workshops, but had a good view in to Car Street, and the imposing entrance to the Pennine Suite, which was the magnificent Ball Room, and recreation club of the  “Oldham Corporation Passenger Transport Department Social Club”. 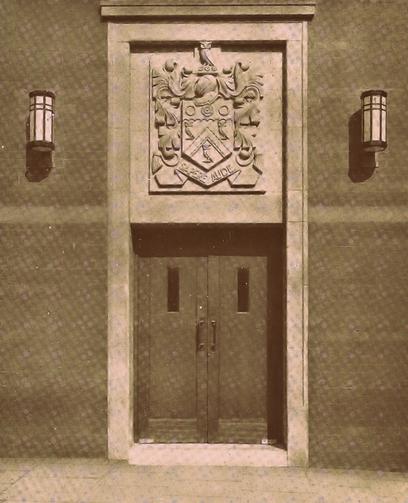 The Entrance to the Pennine Lounge mentioned in the text.