The abandonment of its last tramcar service on Saturday 3rd August 1946, by Oldham Corporation Tramways, was made an occasion of some ceremony. It was estimated that 40,000 people lined the route that summer evening.

A contemporary report of the time commented on the event as follows:-
"A party of some 100 people made up of Town Councillors, Officials of the Transport Department, their wives and friends, assembled in the Wallshaw Street Tram Depot just after 10 p.m. to attend the closing ceremony of the Tramway system, (to be carried out by the Mayor Alderman Stirling T. Marron J.P.) after 46 years service to the Town and population.

Car No. 4 had been repainted and decorated specially for the occasion, carrying around the top deck flags of different colours on which were printed the names of the principle points formerly served by Oldham's trams.

A large number of coloured electric light bulbs replaced the indicator boxes and on one dash was painted the phrase
1900 "Honourably Retiring" 1946     with     1900 "Progressive Efficiency" 1946  -  on the other.
After being in service during the afternoon she finally ran behind the last service car from the Town Hall to Waterhead, back to Hollinwood, and thence to Wallshaw Street Depot.

On the last trip she was driven by the Mayor, dressed in tall hat, frock coat, and striped trousers and carried officials of the Department, members of the Council, and their wives and friends.
For all the Mayor drove the tram most of the way, it was actually in the charge of the oldest Driver, Mr. James Jackson, who had 37 years' service, and the oldest Conductor (or should that be Guard), Mr. Ralph Partington, who had been punching tickets for over 40 years.
At the end of the run a supper was served at the Depot, the Mayor being presented with the tramcar gong as a momento of the occasion."

So passed Oldham's Tramway service in to the history books.

During its 46 years of life the cars had run some 81 million miles, carried 982,941,978 fare paying passengers through all weathers (and we all know what Oldham weather is like) without serious mishap. The trams were a success on all the routes, and were a paying proposition, and for several years the Tramways Committee would make a generous contribution to the rates of the town.

Six cars Nos. 17, 18, 24, 122, 125, and 128, survived the closure of the system and were sold to the Gateshead and District Tramways Company becoming Nos. 72, 71, 35, 68, 69, and 70 respectively in that Company's fleet.
The remainder were broken up in the depot, the majority of the bodies being sold to a Morecambe Holiday Camp, and the trucks and motors going to Calcutta, where no doubt they gave a good many years further service.

A Fleet list of Oldham Corporation Tramways can be seen here 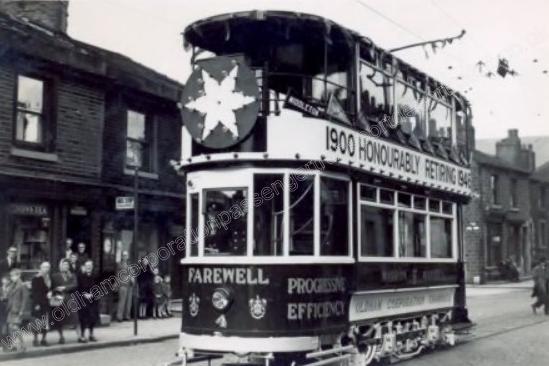 Tram No.4 on the last day of operation on Saturday 3rd August 1946 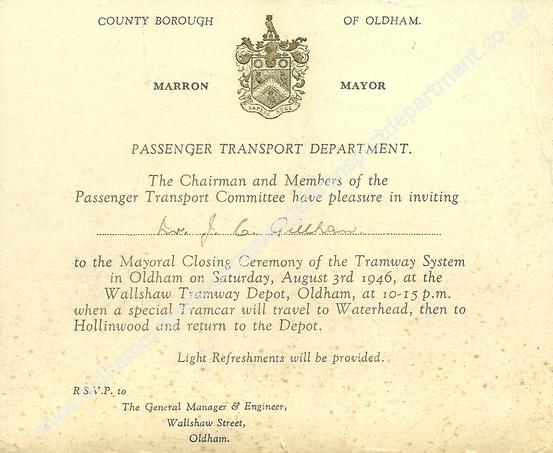